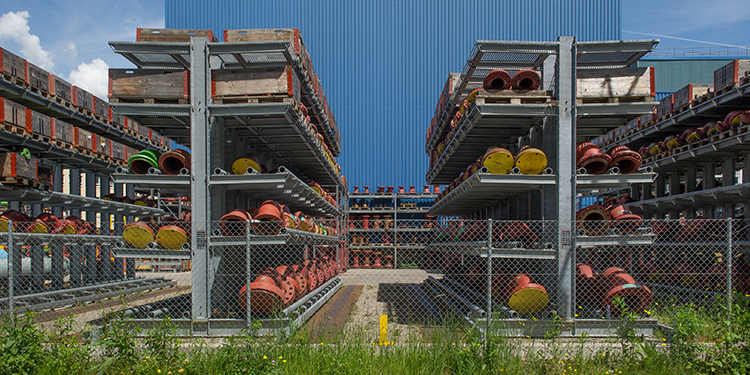 Cantilevered storage rack features horizontal arms that project perpendicularly from vertical columns on one or both sides. Because they have no vertical columns connecting the arms on the aisle face, they are ideal for holding long loads, such as bar stock, piping or lumber. Like all industrial steel storage rack systems, cantilevered rack is designed by a professional rack engineer to match the unique specifications of the loads to be stored within it. Based on a variety of details about the products it will hold (sizes, dimensions, weights, and degree of rigidity or flexibility), the base, upright columns and arms are designed to support each load safely and securely. This includes matching the length of the arms to the depth of the load.

The reason the arm length matches load depth is to ensure that the forklift operator will place the load fully on their span and ideally as centered as possible front to back. More critically, it is important the entire depth of the load be supported by the arm; the load cannot extend past the tip of each arm. Also, the load must be placed as close to the columns as is feasible to prevent the arms from being overloaded. Similar to the need for uniform load placement across two or more arms in the down-aisle direction (parallel to the face of the rack) to prevent overloading of a single arm, placement in the cross-aisle direction (perpendicular to the columns) must likewise be uniform.

The center of the load must not be located beyond the center of the arm, or toward the aisle. The further away from the columns (and closer to the arm tips) that a load rests, the more likely that the arms will become overloaded due to an increased bending moment. For this reason, RMI’s ANSI MH16.3 Specification for the Design, Testing and Utilization of Industrial Steel Cantilevered Storage Racks, section 5.3, states: “In the absence of other information, the arms shall be designed for loads that are symmetrically placed and evenly distributed in the down-aisle and cross-aisle directions. The loads shall be considered equally supported by all arms under the load and the load is evenly distributed from the tip to the rear of the arm.”

In certain instances, a cantilevered storage rack system will be designed with arm lengths longer than the depth of the load because multiple, identical loads will be placed in series — back to front — for storage. For example, three 12-inch-deep loads that are stored on a 36-inch-long arm. As with single loads, each of these loads should be placed as close to the column as possible to ensure that the arms are not overloaded, with the first load placed at the back of the arm, the second in the middle, and the third in the front. It is, therefore, the best and safest practice to train operators to always place product on the load arms as close to the columns as they can in order to preserve the integrity of the cantilevered storage rack system and prevent a failure.