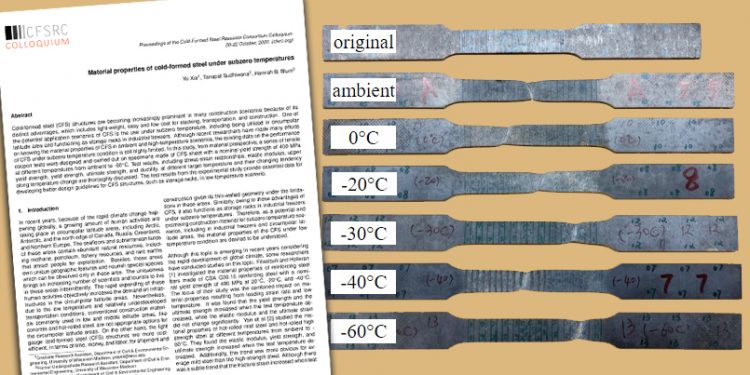 Cold-formed steel (CFS) is used in the construction of both building structures and storage racks. It is also finding application in colder environments. These include key components of industrial steel storage racks used in cold-storage freezers and buildings in colder climates closer to the Arctic and Antarctic regions of the Earth. Although there have been many research studies performed on CFS to determine its material properties in ambient and high temperature applications, less is known about its performance in subzero temperature conditions.

To contribute to the knowledge on this subject, RMI sponsored research that resulted in the recently published white paper, “Material Properties of Cold-Formed Steel Under Subzero Temperatures,” (available as free download at mhi.org/rmi). The final paper — authored by Yu Xia, Graduate Research Assistant; Tanapat Sudhiwana, Former Undergraduate Research Assistant; and Hannah B. Blum, Assistant Professor, all in the Department of Civil & Environmental Engineering at the University of Wisconsin-Madison — was presented at the Cold-Formed Steel Research Consortium (CFSRC) Colloquium in October 2020.

The researchers carried out a series of tensile coupon tests on samples from uncoated CFS sheet with a nominal thickness of 1.80 millimeters (0.07 inches) and nominal yield strength of 400 megapascals (58 kip per square inch). The tests were performed using liquid nitrogen in an environmental test chamber to create different temperatures ranging from ambient to -60o Celsius (-76o Fahrenheit). The strains were measured by an extensometer at each applied load.

They also performed a second series of tests to determine ductility based on precise measurements of spacing changes between grids drawn on the samples to determine elongations at various temperatures. Findings covered in the paper include stress-strain relationships, elastic modulus, upper yield strength, yield strength, ultimate strength and ductility at different target temperatures.

The researchers concluded that:

At different test temperatures, all specimens exhibited similar clear yield points and yield plateaus. The strengths increase from ambient to 0°C and then become stable down to -30°C; the strengths increase again from -30°C to -40°C and does not change much from -40°C to -60°C. The ductility of the material is determined using the grid method to measure elongation with different gauge lengths. The results show that the elongation fluctuates within a reasonable range. Compared with the corresponding ambient cases, the maximum deterioration of specific elongation is around 23%, while deterioration in most cases is between 4% and 20%. Therefore, it can be concluded that the ductility does not deteriorate significantly when the steel is used at subzero temperature down to -60°C.

Click to read the full paper, “Material Properties of Cold-Formed Steel Under Subzero Temperatures.” Additionally, other RMI research publications and presentations can be found here.