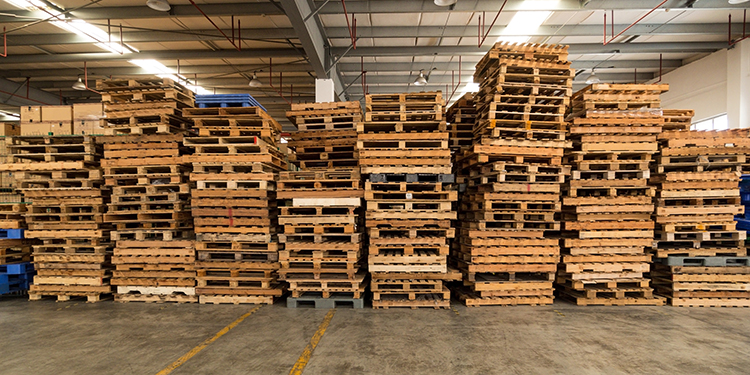 When placing loads of equal weight in storage racks, it’s important to remember that all pallets or loads are not created equal. Some pallets are designed with multiple boards—or stringers—spanning the bottom surface; others have a foot in each corner. Unusually shaped loads like steel coils or rolls of paper can also create problems. The pallet’s bottom construction contributes greatly to whether the load is uniformly distributed or resting atop specific points. That means the distribution of the load weight can be different, depending on the type of pallet underneath it or the specific type of product being stored on the rack system.

When placed in steel storage racks, a uniformly distributed load is one whose weight is evenly distributed over the entire surface of the rack’s beams or deck. A point load is a one with its weight significantly concentrated in one (or more) places on the rack’s beams or decks. For example, a steel coil stored directly on a rack beam can create a very concentrated point load; even if the steel coil weighs the same as a palletized load, the load beam will likely have to be heavier duty. (There’s also a third type of load distribution: a line load, which has only two or three boards across its bottom, which creates a more even distribution of weight than a point load, but less even distribution than a uniformly distributed load).

So what does this mean for rack safety? Placing a point load within a steel storage rack that has been designed solely to support uniformly distributed loads could cause one of two situations: excessive beam or deck deflection and/or failure.

Beam Deflection: When a rack design engineer determines the specifications for a pallet support beam, the maximum amount of permissible deflection—or bowing—is included in the calculations as noted in Section 5.3 of RMI’s ANSI MH16.1-2012: Specification for the Design, Testing and Utilization of Industrial Steel Storage Racks. The deflection limit equals the horizontal length of the beam divided by 180 (i.e. L/180). The safety risk arises if a point load is placed on a beam that has been engineered only to bear the weight of uniformly distributed loads. That’s because the concentration could cause the beam to deflect beyond its maximum allowable amount, leading to possible failure and potentially causing the load to fall.

Decking Failure: Typically made of welded wire with reinforcing channels, or corrugated steel, decking is often placed on pallet rack beams to span the distance between them. While this provides additional support for the pallet load, unless the decking has been properly engineered to accommodate point loads—as specified in RMI’s ANSI MH26.2-2017: Design, Fabrication, Testing and Utilization of Welded Wire Rack Decking—the concentrated point load could cause it to fail and the load to fall.

To ensure the safest pallet rack design, therefore, a qualified design engineer must be advised of the types of loads and the pallets upon which they will be placed for storage. In applications where multiple types of pallets may be stored within the same racking structure, the system should be engineered to support point loads as the most conservative—and safest—approach.

What’s Height-To-Depth Ratio, And Why Is It ...